Gabilan Ranch is an 11,190-acre working cattle ranch nestled in the Gabilan Mountain range in Monterey and San Benito Counties actively grazed by several hundred head of cattle. Wishing to keep the ranch whole and protect its conservation values, the owners—who have held the ranch since 1929—entered into a conservation easement with TNC in 2006. Under the easement, the owners must comply with some restrictions and also allow TNC to monitor the site for compliance once a year, including attention to the grazing intensity using a measure of residual dry matter (RDM) that remains on pastures at the end of the grazing season (September – October timeframe). The rangeland monitoring that is being conducted on the ranch is informing broader rangeland strategies for TNC and our partners across the state.

The ranch is critically located in the northern part of the Gabilan range, which is relatively un-fragmented and serves as an important connectivity area for wildlife like bobcats, mountain lions, and California tiger salamander. The range as a whole is an important ecological link between the coastal Santa Lucia and Santa Cruz mountains and the more arid interior Diablo ranges.

Like the larger range, Gabilan Ranch is dominated by chaparral and coastal scrub but also supports several ecosystem types and rare species—including the Gabilan manzanita—as a result of its isolation and unique geology. Due to its topography, location, and habitats, the ranch is used by a large number of raptors including golden eagles and California condors. The area’s natural beauty and rural character, combined with its proximity to Silicon Valley sprawl and suitability for viticulture, have spurred a rapid increase in population and development. Consequently, the very qualities that draw people to the area are threatened as rural lands, including rangeland and prime agricultural lands, are converted to residential developments, vineyards, and other commercial uses. This puts a strain on natural resources and on residents' quality of life as demands for surface and groundwater supplies increase, transportation infrastructure becomes inadequate, and affordable housing becomes increasingly scarce.

Gabilan Ranch is an excellent example of how permanent conservation easements can preserve agricultural lands, conserve watersheds, and protect open space for the benefit of biodiversity and people and can help curb the undesired effects of the influences described above. 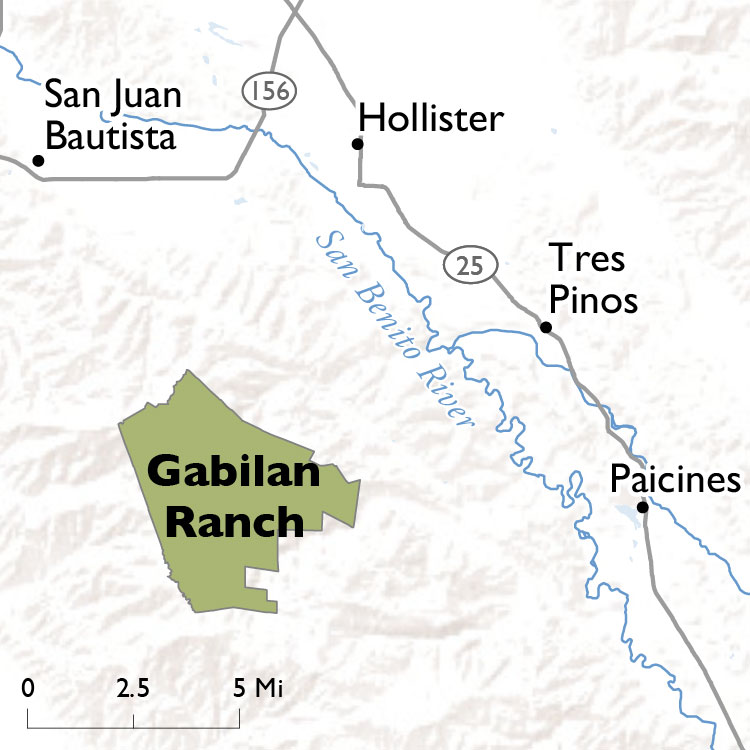